Action / Sci-Fi
LISTENERS (リスナーズ, Risunāzu) is an original Japanese anime television series produced by MAPPA, created by Jin, Dai Satou, Taichi Hashimoto, and directed by Hiroaki Ando.[1] The series premiered in April 4, 2020 on the Animeism programming block on MBS and other networks.[2] The opening theme is "Into the blue's" by ACCAMER written by Jin and features 11 different ending songs sung by µ (Rie Takahashi) and composed by Jin.

The story of LISTENERS is set in a world where humanity's way of life is threatened by mysterious lifeforms known as the Earless. The only hope against the Earless are heroes known as Players, who can interface with special combat mecha known as Equipment.

After witnessing an epic battle (known as a the "Project Freedom Festival") between the Earless and the Players 10 years ago in which a Player named Jimi became a legend, a young boy named Echo has been longing to meet a Player again. Echo lives in a scrap town known as Liverchester, and one day when he's working on excavating the garbage mountain outside of town, he encounters a girl named μ ("Mu") who is suffering from amnesia. μ is also a Player, and she has an input jack in her waist.

Together, Echo and μ set out on a journey to discover μ's origins and to unravel the mysteries of her predecessor, Jimi. 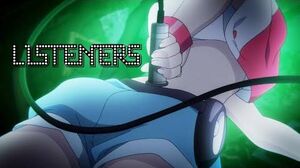 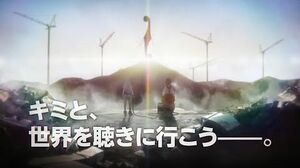 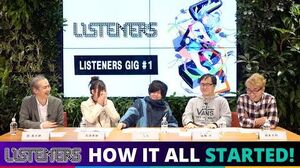 How It All Started Listeners
Panel

Community content is available under CC-BY-SA unless otherwise noted.
Advertisement